By Kristi RogersMay 31, 2021Uncategorized
No Comments

Most people today ride over Raton Pass in a car…but have you ever imagined what it would have been like crossing the pass in a wagon on the Santa Fe Trail?

Raton Pass and the Mountain Route played a significant role in the travel along the Santa Fe Trail. Although the Mountain Route had been used since the 1830s, the torturous 8000-ft., axle-breaking Raton Pass was both a barrier and a gateway. In 1862, following the US acquisition of the New Mexico Territory, “mail contracts”  that were previously awarded to various stage coach companies that preferred the Cimarron Cutoff to the Mountain Branch of the trail, was awarded to the Barlow and Sanderson Stages. This company ran coaches from Pueblo to Trinidad and routes south, but It wasn’t until 1865 that improvements were made to this gateway by Richens Lacy “Uncle Dick” Wootton who made it “somewhat passable” for the stage lines. 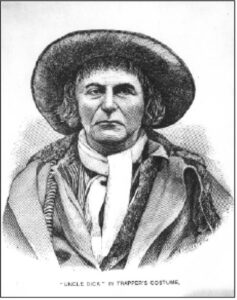 Wootton, after briefly operating a buffalo ranch near Pueblo, Colorado, had settled near Trinidad and leased land from Lucien Maxwell, owner of the Maxwell Land Grant, and obtained a franchise from the territorial legislatures of Colorado and New Mexico to build a 27-mile toll road over Raton Pass. Wootton relied on the strength of the local Ute as laborers to build the road and thereafter allowed the Ute or member of other tribes to use the road for free. The Utes were “treated kindly by Maxwell, who fed, sheltered and traded with them.” Others were charged $1.50 per wagon or buggy or 25 cents for a horse and rider to pass. In an interview with Senator J.M. Madrid in 1933, the toll gate consisted of an “old chain stretched across the road on the north side of Raton Creek” that “extended from the gate in front of the Wootton’s house to the old cottonwood tree across the road.”  Being ever the entrepreneur, Uncle Dick then erected a boarding house, and the location of the toll gate soon became well-known as a “stage station, with provisions, liquor and weekly dancing.”  This soon became the favorite watering hole for the young bloods of Trinidad and the surrounding area.

Tales from the Trail: Charlotte’s Kitchen