Tales from the Santa Fe Trail

By Kristi RogersMarch 8, 2021Uncategorized
No Comments

Tales from the Santa Fe Trail: Recipes from Charlotte’s Kitchen

Among the large number of tales and stories from the Santa Fe Trail, one can find mention of a woman named Charlotte, who was known for both her culinary skill and poise in what was otherwise a rough context for a woman. Below, we share two of her recipes and excerpts from a book in which she is featured, “Eating up the Santa Fe Trail.”

“Over the culinary department presided of late years a fair lady of color, Charlotte, by name, who was, as she loved to 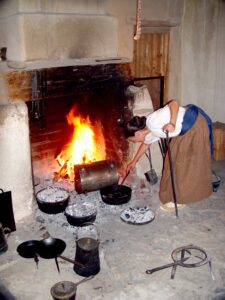 say, ‘de onlee lady in de dam Injun country,’ and who moreover was celebrated from Long’s Peak to the Cumbres Espanolas for slap-jacks and pumpkin pies.” – George Frederick Ruxton, who visited Bent’s Old Fort in May 1847.

Charlotte and her husband Dick were enslaved people owned by the Bent Family, who both worked at Bent’s Fort. This being pre-Civil War days, that “peculiar institution” had yet to be abolished. Lewis Garrard, another visitor to the fort noted Charlotte as “the glib-tongued sable Fort cook” and a “culinary divinity.” She was also reportedly the “belle of the ball” during Fort fandangos.

Charlotte and Dick were last known to be traveling back east on the Santa Fe Trail later in 1847, as reported by Garrard, having been set free due to “the valor evinced by the latter, Dick, at the Pueblo de Taos.” That was the fight to put down the Taos Revolt in which the first American governor of New Mexico, Charles Bent was killed. 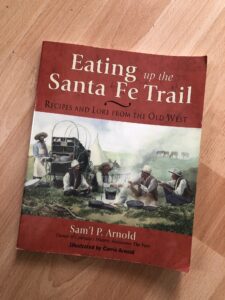 Below, you will find a couple of recipes that would have been at home in Charlotte’s kitchen, courtesy of Sam’l P. Arnold, founder of the famous Morrison restaurant, The Fort, and were published in his book, “Eating up the Santa Fe Trail.”

Mix dry ingredients together, then fold in eggs with whisk. Add pumpkin and whisk well. Add the milk and mix in. Pour into a 10-inch pie shell and bake (at 350 degrees) for 1 hour and 25 minutes. Serve with whipped cream or ice cream.

Slap Jacks
Take and scald a quart of Indian meal (a.k.a. corn meal as would be used in grits or cornbread) in milk if you have it – water will do.  Turn it out and stir in a half pint of yeast (a package of dry yeast in a cup of warm water), and a little salt. Fry the slap jacks when light, in just sufficient fat to keep them from sticking to the frying pan. Another nice way: turn a quart of boiling mile or water to a pint of Indian meal, stir in three tablespoons of flour, three eggs, and two teaspoons of salt.