TRINIDAD AND THE LUDLOW MASSACRE

Trinidad has a diverse past and and we are constantly adding to this page to visually showcase aspects of its history. Below, you can find a description of the Ludlow Massacre and a collection of images captured during and following the event. Visitors to Trinidad who are interested in this event, which played a key role in shaping worker’s rights across the nation, can visit Trinidad’s Miner’s Museum and view a collection of fantastic paintings featuring the Ludlow Masscare, and can also travel to the Ludlow Memorial itself, which is pictured directly below.

The Massacre, Funerals, and Protest March

In August 1913,  the United Mine Workers of America (UMWA) extended invitations to company representatives to meet about the grievances of miners working in the Colorado coal mines—including low pay, long and unregulated hours, and management practices they felt were corrupt—but they were rebuffed.

About 10,000 miners under the direction of the union went on strike.  Among their demands were a ten-per-cent pay raise, the enforcement of an eight-hour working day, and the right to live and trade outside the company-owned town. Many of the rights they sought were required by Colorado law but remained unenforced. Labor organizer Mother Jones gave a rousing speech in support of the strike on the steps of the Trinidad Post Office for which she was imprisoned for 20 days. When she was released, she saw that the miners had been evicted from their shacks for attempting to strike. They were now living in tent colonies outside the towns of boarded-up shanties they had once called home.  On September 17, 1913, the official call to go on strike was received. Outraged by the workers’ insubordination, CF&I hired “detectives,” working for a private security company called Baldwin-Felts, who began driving around the tent colony at night, terrifying, injuring, and sometimes killing the sleeping miners and their families. 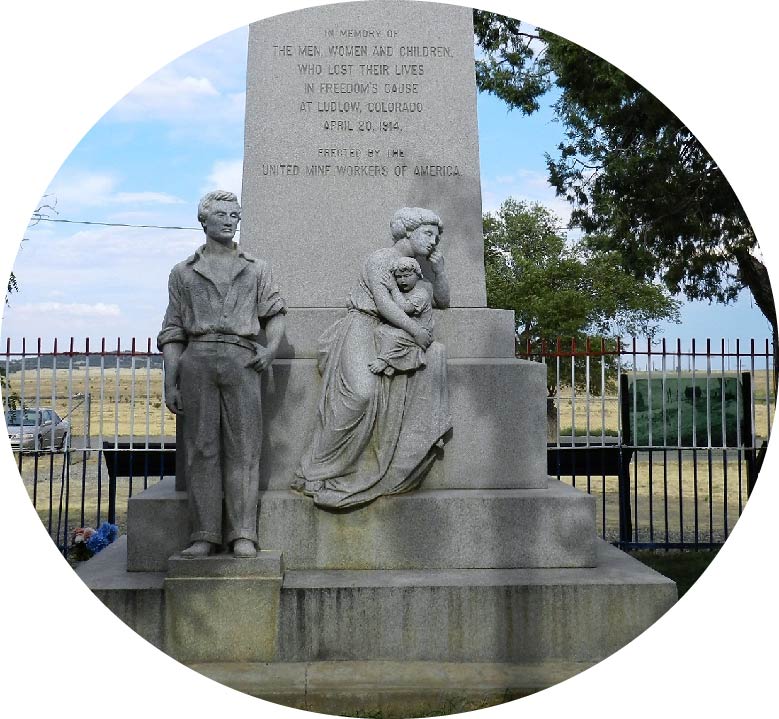 A memorial by sculptor Hugh Sullivan was erected by the United Mine Workers of America at the Ludlow Tent Colony Site in 1918.

The miners organized armed patrols to ward off the detectives, but they were no match for the “Death Special” – the name Baldwin-Felts agents gave to the car in which they roamed the coalfields at night. In response to the terrorism of the agents, the miners and their families dug pits in the earth under their tents, in which they hid at night to avoid being sprayed by bullets. They endured this violence all through the winter and spring. The few occasions they fired back at agents were used as justification for calling in the Colorado National Guard.

On April 19, 1914, the striking miners at Ludlow put on an Orthodox Easter celebration for the Greek families in their tent colony. On April 20, the first shot was fired at Ludlow and the gun war between the armed striking miners at Ludlow and the Colorado National Guard ensued. The face-off raged for 14 hours, during which the miners’ tent colony was pelted with machine gun fire from a bluff overlooking the strikers, and then ultimately torched by the state militia. A number of people were killed, among them two women and 11 children who suffocated in a pit they had dug under their tent. Three of the striking leaders, including labour organizer Louis Tikas, were captured and killed by the National Guard.

After the massacre, the strikers formed a militia with volunteer fighters from tent colonies throughout the coalfields. For ten days, they dueled with Colorado Guardsmen and private agents to again ensure the safety of the encampments for the miners. Mines in the Colorado towns of Berwind, Tabasco, and McNally were seized in a hail of gunfire. Those in Aguilar and Walsenburg were completely torched. The final battle occurred on April 29 in Forbes, Colorado. Greeks, Italians, Slavs, and Mexicans were among the 700 to 1,000 men who set out at dawn from the refugee tent colony established for the Ludlow families, called Camp San Rafael. At Forbes, the strikers encountered the state militiamen, mine officials, and strikebreakers. The camp fell in less than an hour.

U.S. President Woodrow Wilson sent in federal troops to restore order. Unlike the National Guard, the federal troops were impartial and kept strikebreakers out of the coal mines. The strike ended on December 10, 1914.  On June 23,  2009, Governor Ritter declared The Ludlow Massacre Memorial a National Historic Landmark.